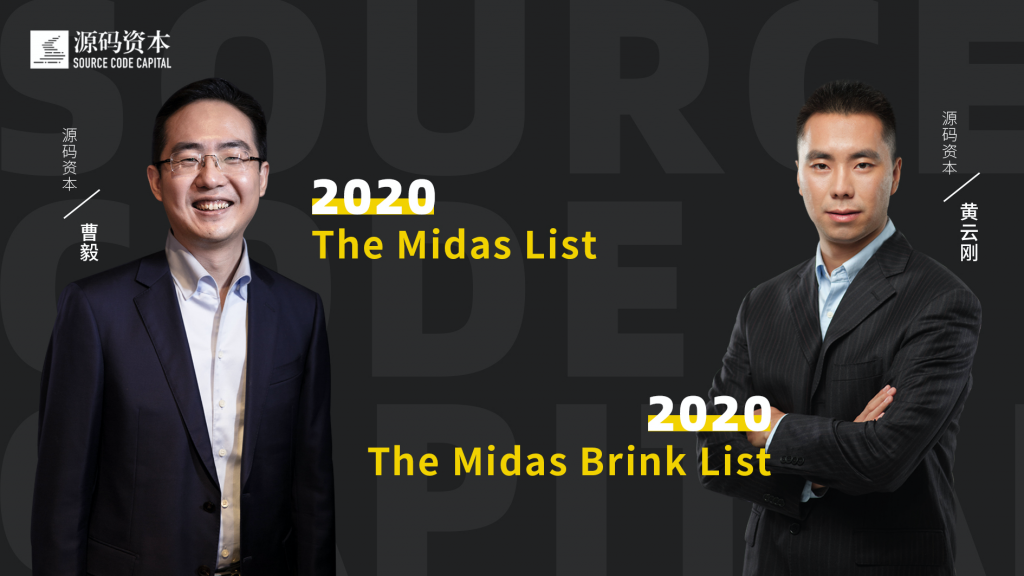 In the morning of April 14, 2020, Forbes unveiled its Midas List and Midas Brink List for 2020, ranking top venture investors in the world.

Cao Yi, Founding Partner of Source Code Capital, is once again chosen to join The Midas List for the third consecutive year, after being awarded with such distinction in 2018 and 2019. Huang Yungang, a Partner in Source Code Capital, made his debut appearance on the 2020 Midas Brink List.

Source Code Capital was founded in the Spring of 2014, and since then it has devoted to becoming the partner of choice for leading entrepreneurs in today’s “Information Revolution” era. With over USD $1.5 billion and RMB 5 billion under management, it has been recognized by the world’s top SWFs, university endowments, non-profit organizations, pension funds, FoFs, family offices, leading industry corporations, as well as professional investment institutions such as PRC central government guidance funds and state-owned enterprises.

The Source Code team also expanded, from the initial dozens of people to over 60 professionals across three distinct functions of investment, post-investment, and platform operations. The team encompass different aspects of the investing industry such as investment management, product technology, consulting and media, forming a unified base and with a multi-dimensional perspective.

At the start of this epidemic, in order to help and support medical personnel that were fighting the virus on the frontline across China, Source Code Capital donated RMB 3 million to a Bytedance-anchored humanitarian SPV (in collaboration with the China Red Cross Foundation). This donation has the goal of supporting frontline medical staff who risk their lives to fight the coronavirus.  In the meantime, Source Code Capital called on all Code Class members (individuals and businesses alike) to actively incite them to contribute, within their abilities, to the fund and to offer their compassion. Code Class members including Baibu, Che300, Casstime, Ruigushop, Simple Pieces, Yimidida, Zhaomei, and Zhongneng United donated RMB 1+ million, meanwhile, Chuxin’s CEO Liu Changyi, Yishen’s CEO Huang Yiran, and Zhongneng United’s CEO Yang Tianli, personally donated RMB 125,000.

3. The Four Pillars of Youth：Becoming an institution, the spirit of entrepreneurial investment

At the beginning of 2020, during a Tsinghua PBCSF where he was invited to, Cao Yi mentioned in his speech that good companies in the Second Half of the Industrial Internet has several characters. The macro level is to evolve from an incremental economy to a consolidating economy (as in more moderate growth). The industrial level has shifted from a pure 2C focus to having a degree of equilibrium between 2C/2B, perhaps with 2B even taking the lead sometimes. Entrepreneurs initially focused more on capturing market dividends (such as China market’s expansion bonus), but are now obliged to pay more attention to their own organizational capabilities. The capital level (as in funding supply say from venture capitalists or private equity) was formerly more concerned with finding high growth models, with higher speeds of expansion (and in return accept a faster depletion of resources or cash burn), but will now pay more attention to looking for business models that offer more moderate but sustainable growth, with slower rates of consumption, and more moderate usage of funding or spending.

Source Code Capital is also a “youth,” facing the “second half” various uncertainties. In order to do so, it is necessary to find our inner strength and achieve the “The Four Pillars of Youth” on an organizational level: the Tao or the Way (Editor’s note: as in the Chinese concept developed by Confucius and Mencius – being wise and just, enlightened), Fa or a method, Shu or tactics and strategy, and finally, Qi, which would be the equivalent of talent. This will make us the most entrepreneurial investment institution. (Source Code Capital Cao Yi: “The Four Pillars of Youth — Good Companies in the Second Half of the Industrial Internet.”)

Finally, Source Code Capital hopes to accompany entrepreneurs at all times. Facing a complicated and complex external environment, to become the most entrepreneurial investment institution, to find more people with this mindset, and to rely on the power of technology and capital to promote business change and create enduring real value in the “second half”!

A Breakthrough in China’s Venture Capital Industry Model: The Advent of Ecosystem VCs and Value Creation